QAnon + Millenials and Gen Z, A Match Made in Heaven?

Note: This originally appeared on the blog One Twenty Seven

“OK Boomer.” Every Gen Z’er or Millennial has heard of this phrase or has used it themselves. We know that it has come to represent how out of touch the Baby Boom generation is. While much of this comes from the idea that Boomers’ conservatism has influenced decisions that have jeopardized our futures (look at the climate change crisis and economic crisis), part of it also has to do with the impact that misinformation has on older generations. According to a study from 2019, older people are more likely to both view and share fake news. In fact, people over the age of 65 shared more fake news than any other age group and seven times as much as 18-29 year olds. This has caused some people to ask the question bluntly put by Michael Hobbes of the Huffington Post: what is the internet doing to Boomers’ brains?

This got me wondering, how do different generations view QAnon – the most significant source of misinformation of 2020? Which generations are most in agreement with QAnon and which are most in disagreement?

Fortunately, I can answer this question. In the last week of October, I, along with a few others, surveyed 1,704 American adults recruited by Qualtrics Panels. We used a set of quotas so that the final sample resembled the nation and relied on a weight variable to correct remaining imbalances.

To gauge QAnon support we asked respondents whether they agreed that, “Within the upper reaches of government, media, and finance, a secretive group of elites are thwarting Donald Trump’s efforts at reform, fomenting street violence, and engaging in child trafficking and other crimes.” Nearly 40 percent of the sample agreed or strongly agreed.

Looking to the graph below, we can see that Millennials and Gen X’ers agree with QAnon more than any other generation as roughly 44.6% and 42.7% of the respondents agreed, respectively. Following them was the Silent Generation with 38.6%, Boomers at 34.6%, and Gen Z at 33.9%. Surprisingly, Boomers and Gen Z had the lowest levels of agreement with QAnon. This demonstrates that although Boomers may spread more false information, they don’t believe in conspiracy theories (at least QAnon) as much as other generations, particularly Gen X and Millennials. 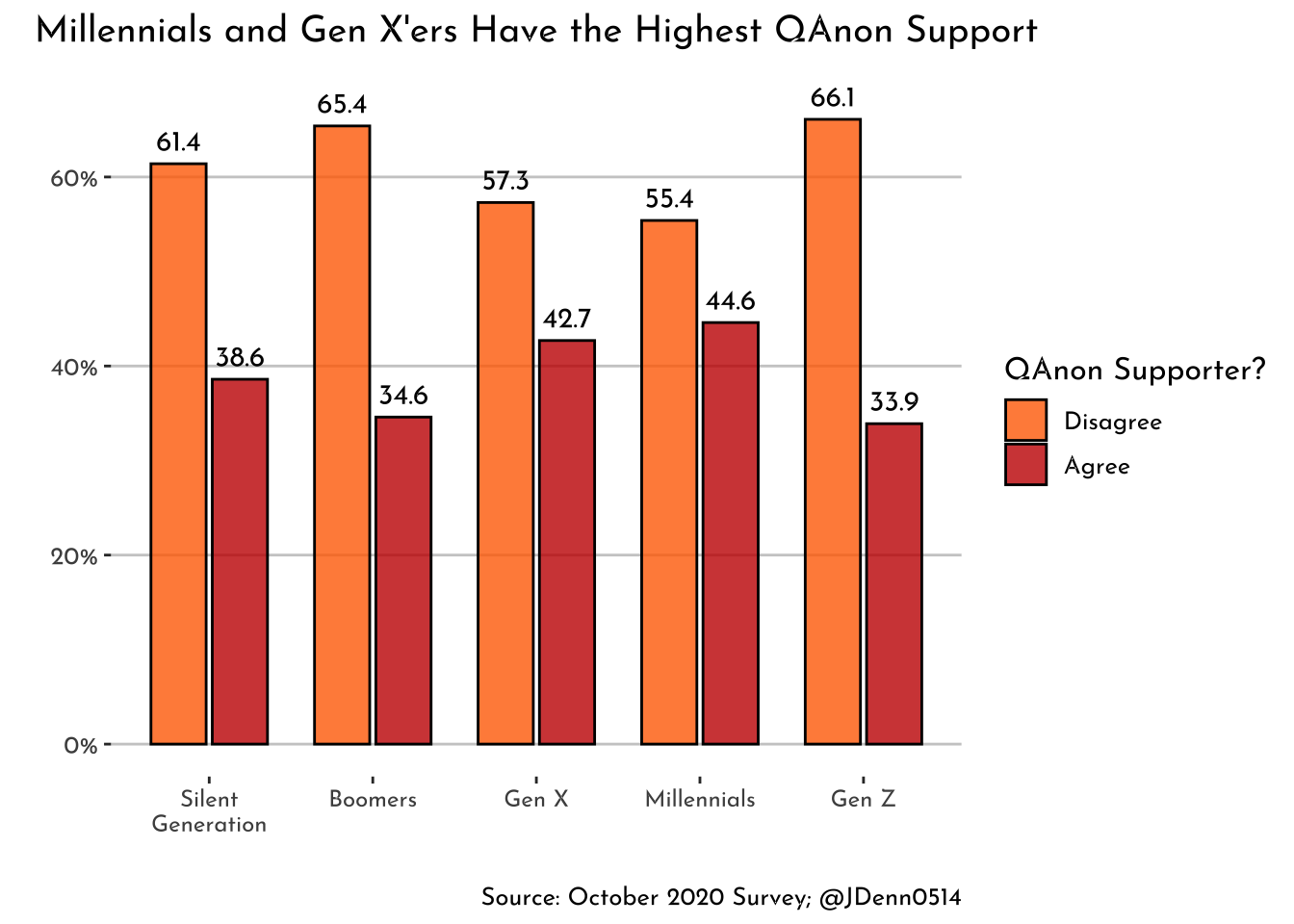 In a previous article, Paul A. Djupe and I looked at the relationship between antisemitism, QAnon, and Christian Nationalism. We demonstrated that as Christian nationalism increases, antisemitic sentiment also increases. This was especially true among QAnon followers as they had higher levels of antisemitism regardless of their Christian Nationalism levels. We concluded that QAnon must have an impact on antisemitism.^[1] This got me wondering, does this impact differ for each generation? Turns out, it does affect each generation very differently.

We can see in the graph below that QAnon has the biggest impact on antisemitic sentiment among Millennials and Gen Z. In fact, we can see that the effect QAnon has on antisemitic sentiment increases dramatically for younger generations. For Gen Z, the difference among QAnon and non-QAnon followers is 2.61 antisemitic tropes (e.g., “Jews killed Jesus.”), for Millennials it is 2.52 tropes, for Gen X it is 1.83, Boomers it is 0.63, and for the Silent Generation it is 0.89 tropes. Put another way, overt antisemitic sentiment increases by 150% (2.5x larger) among Gen Z QAnon followers, but for Boomers it increases by only 39% (1.39x larger). This might be attributed to older generations’ exposure to the Holocaust which limits what parts of the QAnon conspiracy theory they are willing to believe, such as the antisemitic aspects. Unfortunately, young people do not have this limiter and are more willing to accept more aspects of QAnon theories. 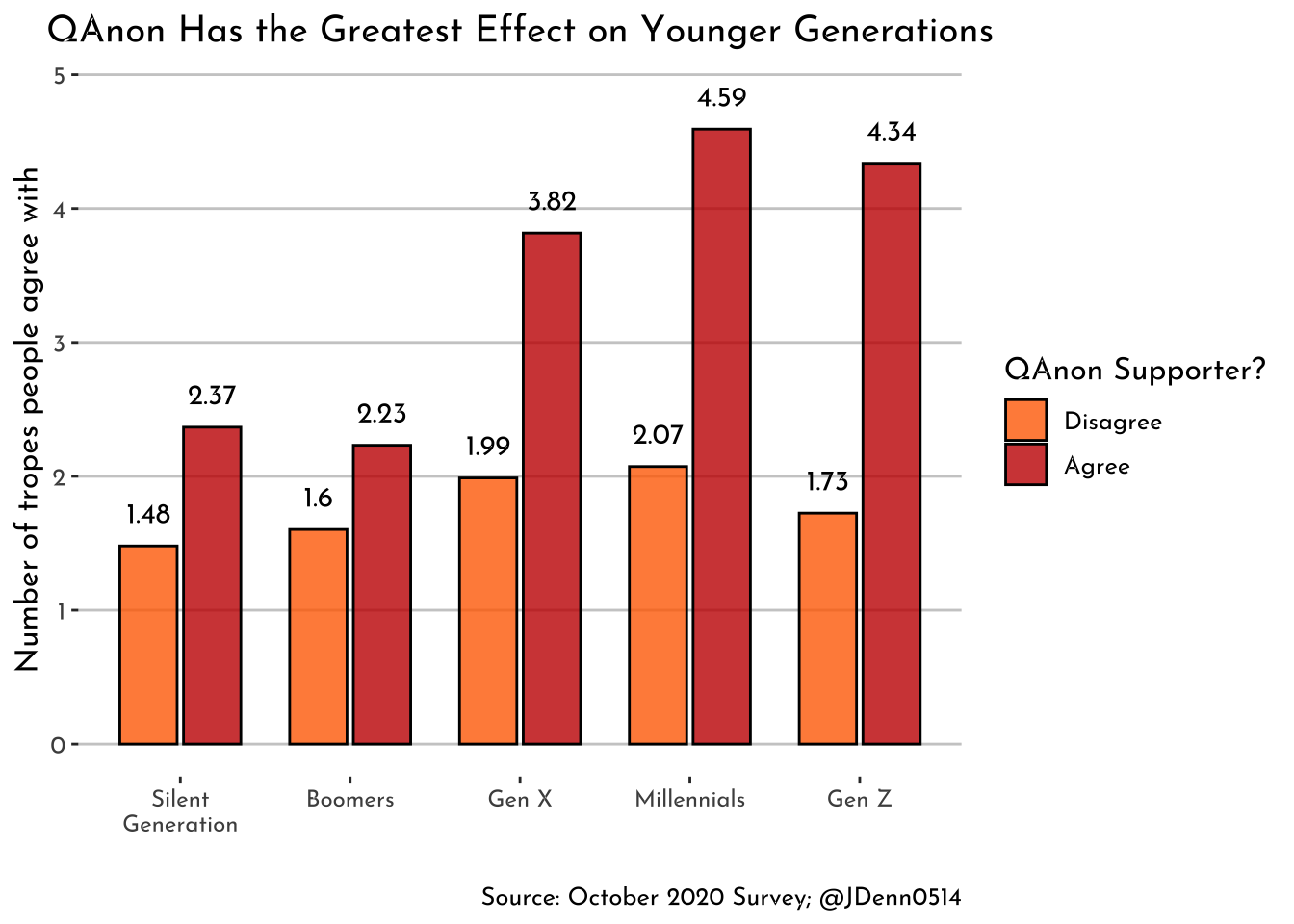 QAnon is a conspiracy theory that took this country by storm and while many think it is some fringe theory relegated to far-right extremists, it is not. Over one third of the respondents from each generation are QAnon supporters, with the highest support coming from Millennials (47.8%) and Gen X (46.2%). This is significant for two reasons. First, we have seen how QAnon can lead to violence (e.g., January 6th insurrection). Second, it significantly boosts antisemitic sentiment, especially among young people.

This begs the question, is QAnon indoctrinating its followers in antisemitism or is it simply attracting people that are already antisemitic? And more importantly, assuming these people get reintegrated into mainstream society, will they maintain these antisemitic views? 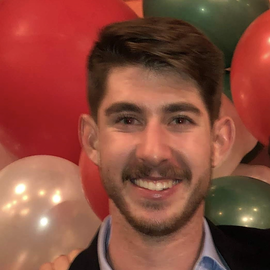 Undergraduate Researcher in the Department of Political Science

Jacob Dennen is a senior studying Political Science and conducting a year-long senior research project on antisemitism. Outside of school, he is most excited to start competing in his final season on the Men’s Tennis Team. Be sure to check out his twitter account as well.